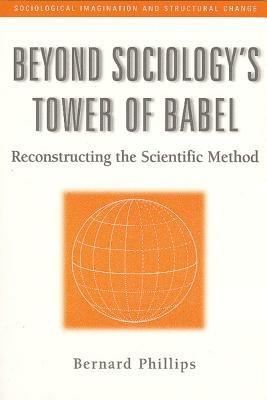 Beyond Sociology's Tower of Babel: Reconstructing the Scientific Method 
To look outside the discipline of sociology is to find little credibility given to the field as science. Bernard Phillips argues that we are learning to see ever more clearly the contradiction between scientific standards and what in fact has been achieved by sociology. Instead of knowledge based on the full range of our findings, we have separate pieces of knowledge located within the diverse areas of the discipline, and fads and fashions in the ideas and terms we use with relatively little cumulative development. This has led many to question whether any "scientific method" can be applied to human behavior. If the arguments and alternative interpretations in this book on the problematic nature of sociology's use of scientific method prove to be credible and fruitful, then the implications are profound. For example, the conclusions drawn for every single social science study that has ever been conducted would be open to reinterpretation, because they fail to take into account systematically the enormous complexity involved within any given instance of human behavior. Our present approach assumes implicitly that the pieces of the human jigsaw puzzle can at some point be put together so as to yield a coherent picture. Yet, as Phillips shows, if each piece is itself deficient, then no coherent picture emerges when we attempt to put the pieces together. Refusing to take the current fragmentation of sociology as inevitable, Phillips offers a clear vision, through a series of heuristic "web" images, of how sociologists might achieve the cumulative development and credibility that are the hallmarks of any science. His research draws heavily on the works of classical and contemporary theorists, philosophers, and historians of science, as well as on postmodernist critiques and responses to postmodernism. This reconstruction will be useful for courses in method in the study of the classical tradition of sociology. Bernard Phillips was introduced to sociology at Columbia University by C. Wright Mills. A former professor of sociology at Boston University, cofounder of the ASA Section on Sociological Practice and founder of the Sociological Imagination Group, his publications emphasize methodology and theory.
Leggi di più Leggi di meno