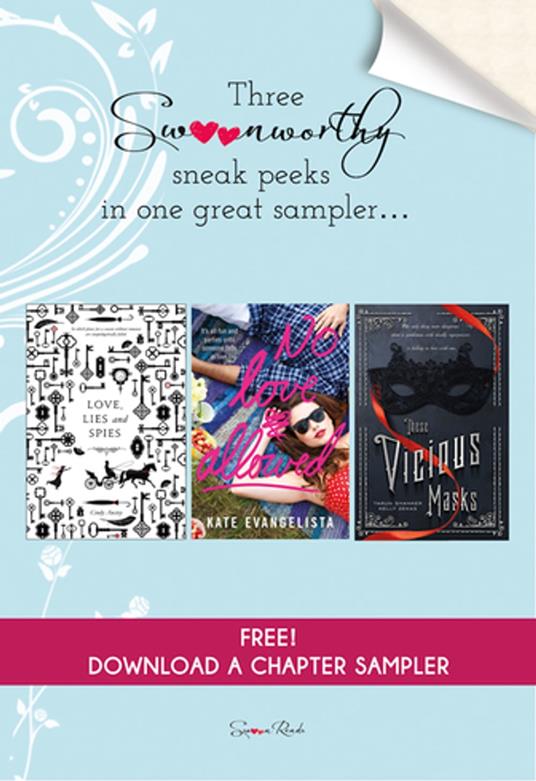 Love, Lies and Spies, No Love Allowed, These Vicious Masks 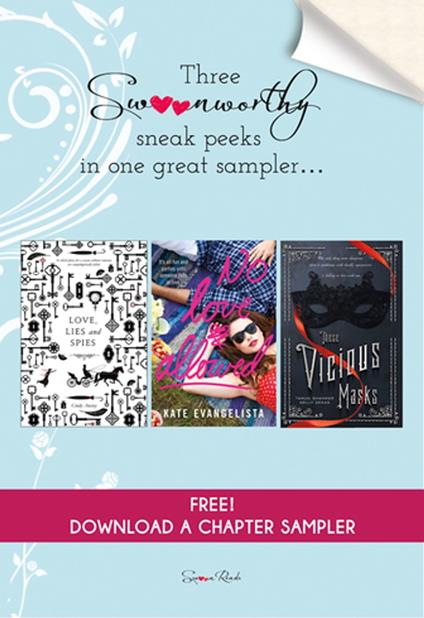 
Download the first chapters of THREE new books chosen by the hottest new community of young adult readers and writers at Swoon Reads. About LOVE LIES & SPIES by Cindy Anstey Juliana Telford is not your average nineteenth-century young lady. She's much more interested in researching ladybugs than marriage, fashionable dresses, or dances. So when her father sends her to London for a season, she's determined not to form any attachments. Instead, she plans to secretly publish her research. Spencer Northam is not the average young gentleman of leisure he appears. He is actually a spy for the War Office, and is more focused on acing his first mission than meeting eligible ladies. Fortunately, Juliana feels the same, and they agree to pretend to fall for each other. Spencer can finally focus, until he is tasked with observing Juliana's traveling companions . . . and Juliana herself. About NO LOVE ALLOWED by Kate Evangelista Caleb desperately needs a new fake girlfriend. Either he attends a series of parties for his father's law firm with a pretty girl on his arm, or he gets shipped off to Yale to start a future he's not ready for and isn't sure he wants. And sadly the last unattached girl in his social circle has just made the grievous mistake of falling in love with him. Fortunately, Didi, the waitress at the Country Club who just lost her job, is open to new experiences (also, art supplies are expensive!). It's the perfect setup for them both. Caleb has only one rule for the arrangement: Didi must not fall in love with him. The summer nights tick by in a whirl of lavish parties, and Didi is enjoying her foray into high society. But Caleb soon starts to worry that this time he's the one in danger of falling in love. About THESE VICIOUS MASKS by Tarun Shanker and Kelly Zekas Evelyn has no interest in marriage and even the dashing Mr. Kent can't make her want to live up to society's expectations. She'd much rather assist her beloved sister Rose in becoming the world's first female doctor. But everything changes the night she meets Sebastian Braddock - not only is the reclusive lord both vexing and surprisingly attractive, he's also quite possibly mad, and his interest in Rose is galling. So when Evelyn wakes up to discover that Rose has disappeared, she immediately suspects Sebastian. But then she discovers that Sebastian's strange tales of special powers are actually true, and that Rose's kidnappers have worse in mind for her than simply ruining her reputation. Surrounded by secrets, lies, and unprecedented danger, Evelyn has no choice but to trust Sebastian, yet she can't help but worry that Sebastian's secrets are the most dangerous of all.
Leggi di più Leggi di meno