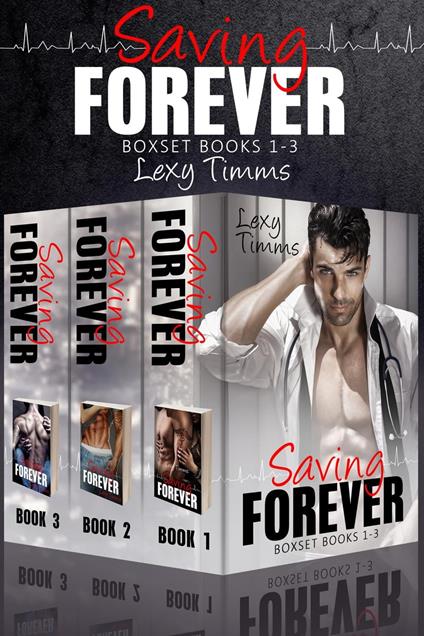 
Enjoy the first 3 parts of the international bestselling series SAVING FOREVER! Part 1 Charity Thompson wants to save the world, one hospital at a time. Instead of finishing med school to become a doctor, she chooses a different path and raises money for hospitals – new wings, equipment, whatever they need. Except there is one hospital she would be happy to never set foot in again--her fathers. So of course he hires her to create a gala for his sixty-fifth birthday. Charity can't say no. Now she is working in the one place she doesn't want to be. Except she's attracted to Dr. Elijah Bennet, the handsome playboy chief. Will she ever prove to her father that's she's more than a med school dropout? Or will her attraction to Elijah keep her from repairing the one thing she desperately wants to fix? Part 2 When a broken relationship exposes hidden scars of the past, can a successful business woman let go of the pain? Will Charity Thompson ever forgive her father for not being there when her mother died? Six years later, she agrees to organize the Diamond Gala for his hospital. As much as she despises working with her controlling father, she meets Dr. Elijah Bennet. The handsome playboy chief is the perfect distraction when her emotions are running amuck…feelings she's spent her entire life hiding from her father. Throwing herself deeper into work, she tries to forget about the pain that threatens to consume her. Charity tries to fight the attraction she feels toward Elijah, but the spark is undeniable. The passion that consumes her heart and her body is something she's never felt with any other man. Everybody makes mistakes, but Charity believes she's made the biggest one of her life. Will she ruin her chances with Elijah and damage the relationship with her father beyond repair? Part 3 Charity Thompson is finding her way in life. Dr. Elijah Bennet is proving to be the consuming temptation she finds herself not wanting to lose.
Leggi di più Leggi di meno