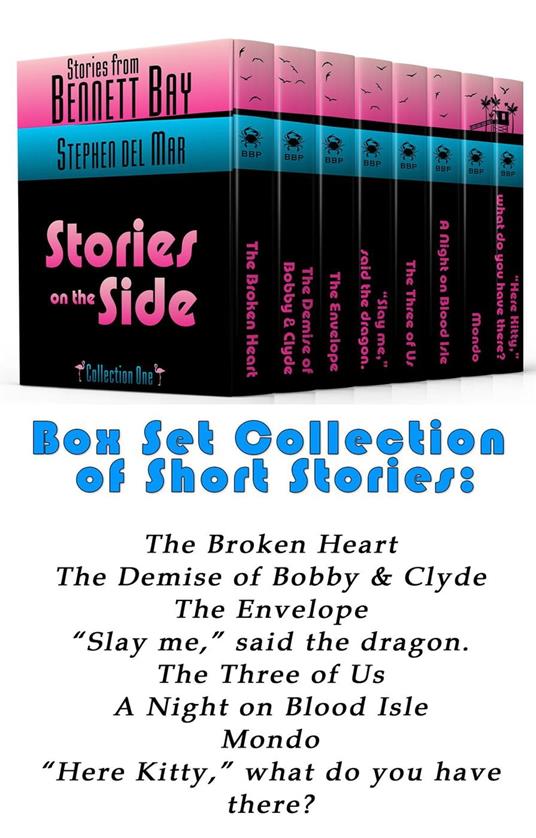 Stories on the Side: Collection One 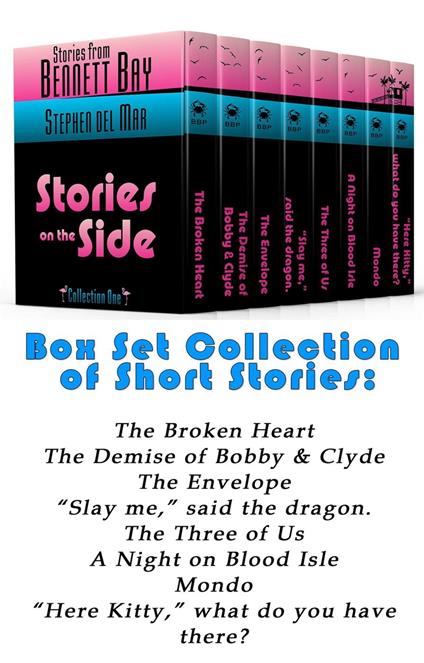 
A boxed set of short stories running along the side of Stephen del Mar's Stories from Bennett Bay series. The Broken Heart Zach Thorensen came to Big Cypress County to renovate a classic cabin cruiser and enjoy a quiet retired life. But a hurricane and a message from the past waylaid him, giving him a chance to mend his broken heart. Will he take it? The Demise of Bobby & Clyde Bobby and Clyde are two young men in love. They are also running from the law in the midst of a hurricane and, unwisely, take refuge in Big Cypress County's most haunted house. Will they escape the law? Will they escape the house? The Envelope The economy was bad, like the Great Recession bad, and Tony Gallo's love, Lance, took a contracting job overseas to save the family's home. And IED took Lance from the world. Six months after his death, Tony gets Lance's last letter. "Slay me," said the dragon. Drake is a hot, blond college twink. It's his twenty-first birthday and he's ready to put the moves on his roommate, Flint. Unfortunately, they both have secrets and Steam, the leather bar in a rundown section of Bennett Bay isn't what it appears either. Do you know all the ways you can slay a dragon? Some are heartbreaking. The Three of Us It's the first week of college for Sam Richards and he's pretty sure he's made some bad choices. Rooming with his straight best friend that he's crushed on for years is at the top of the list. Then he finds Jeff—or maybe Jeff really found him, and then he loses Jeff. There is panic, that bit about actually jumping off of a bridge, and it's not even the weekend yet. Turns out a lot of a college education doesn't happen in the classroom. A Night on Blood Isle Storm and Sky are young twin boys on a sailing trip out to the Sweetwater Keys with their adopted family. As the sea fog surrounds them, the older boys tell campfire stories about cursed pirates. What they forget is there is a bit of truth in all legends. Mondo Tamás isn't having a good night.
Leggi di più Leggi di meno