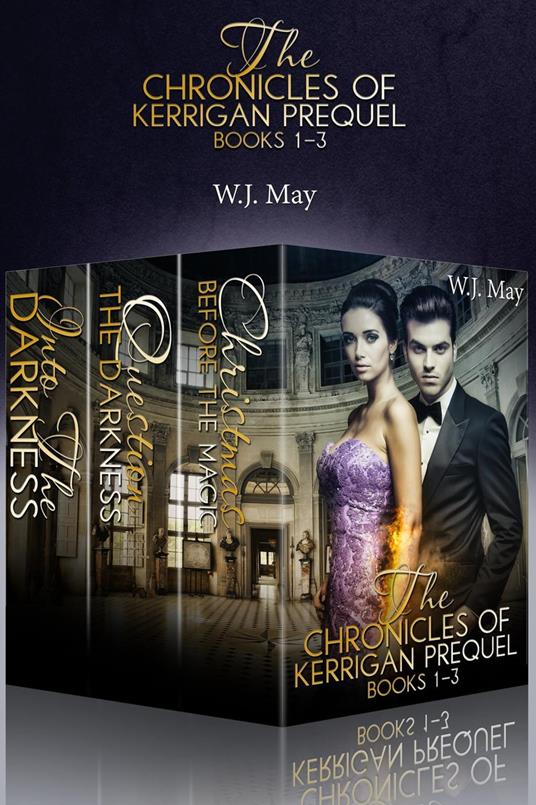 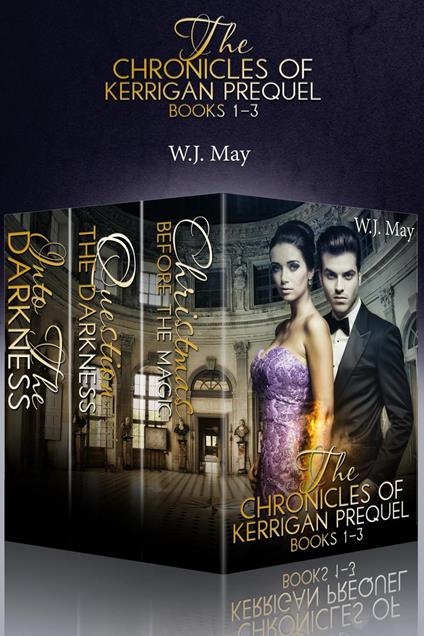 
A Boxset collection of the first 3 books in the Chronicles of Kerrigan Prequel Series! Fall in love with USA TODAY Bestselling author, W.J. May's international bestselling series. Learn how it all began... before the magic of tatùs. Christmas Before the Magic - Book #1 When Argyle invites his best friend, Simon Kerrigan, home for the Christmas holidays, he wants to save Simon from staying at Guilder Boarding School on his own. Simon comes along and doesn't expect to find much more excitement in the tiny Scottish town where Argyle's family lives. Until he meets Beth, Argyle's older sister. She's beautiful, brash and clearly interested in him. When her father warns him to stay away from her, Simon tries, but sometimes destiny has a hope of it's own. Question the Darkness – Book #2 Learn how it all began … before Rae Kerrigan. The sins of the father are the sins of the son. What did Rae's father do that put fear in people's eyes at the name Kerrigan? Simon Kerrigan is a bright kid. He likes to ask questions and push adults in their way of thinking. He's falling for a girl he's been warned to stay away from. Tempted by forbidden love, he also must face the biggest challenge of his life: receive a tattoo on his sixteenth birthday. This ink is going to give him a supernatural ability unlike anyone before him. When secrets of the past begin to reveal themselves, he questions everything he's ever known. Pressure from Guilder Boarding School and the Privy Council only confuse Simon more as he struggles to find himself. How hard will he have to shake the family tree to find the truth about the past? The Chronicles of Kerrigan Prequel is the beginning of the story before Rae Kerrigan. Christmas Before the Magic is just the beginning (but not the end... ) Into the Darkness – Book #3 What did Rae's father do that put fear in people's eyes at the name Kerrigan? After a mysterious attempt is made on his life, Simon Kerrigan has more questions than ever, and this time, he's not the only one. The beginnings of a secret society are formed at Guilder. A society of other like-minded students all unsatisfied with the status quo. All searching for the truth. But things aren't always as they seem. When Simon gets an unexpected visitor, his entire world is turned upside-down. Suddenly, the rules that were made to keep him safe, are the only things standing in his way. Who can he trust? Can he learn to master his tatù? Most importantly, can he do it in time to protect those things that are most precious to him? Prequel Series: Christmas Before the Magic Question the Darkness Into the Darkness Fight the Darkness Alone in the Darkness Lost in Darkness The Chronicles of Kerrigan Series Rae of Hope Dark Nebula House of Cards Royal Tea Under Fire End in Sight Hidden Darkness Twisted Together Mark of Fate Strength & Power Last One Standing Rae of Light The Chronicles of Kerrigan Sequel A Matter of Time Time Piece Second Chance Glitch in Time Our Time Precious Time The Chronicles of Kerrigan: Gabriel Living in the Past Present for Today Staring at the Future Kerrigan Chronicles Stopping Time, A Passage of Time, Ticking Clock
Leggi di più Leggi di meno