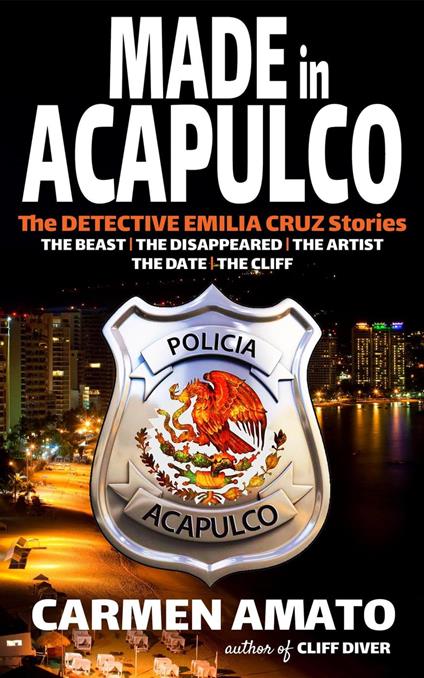 
Imagine if you were the first and only female police detective in Acapulco. Mexican drug cartels battle for control. Politicians are bought with blood money. ***You fought your way up the police ladder to the detectives squadroom. But you're still fighting. Because they're still trying to break you.*** MADE IN ACAPULCO is a collection of short stories featuring Emilia Cruz, the first and only female detective on the Acapulco police force. Taking place before the full-length Detective Emilia Cruz novels, the stories form a prequel to the series: The Beast captures Emilia's struggle to become the first female police detective in Acapulco. It previously appeared in The Huffington Post's Huff/Post 50 Featured Fiction showcase. The Disappeared sees Emilia search for a friend who goes missing. Those who have gone missing amid Mexico's drug war violence is a continuing theme throughout the mystery series. The Artist was inspired by Mexican poet Javier Sicilia's efforts to bring awareness to the plight of families impacted by the drug war violence and references photos of some of the rallies held in Mexico in recent years. The Date explores the downside of a job that pits Emilia against Mexico's enduring culture of machismo, while also drawing on real events that occurred in a nightclub in Mexico in 2006. The Cliff is the original Emilia Cruz story. Written for a literary critique group, the story was initially entitled So Far From God and introduces hotel manager Kurt Rucker. The story became the basis for CLIFF DIVER, the first Emilia Cruz novel. With hot nights on the beach and suspense straight out of the news, the series goes inside Mexico's drug war with a fearless style and a woman who will be hard to forget. PRAISE FOR THE DETECTIVE EMILIA CRUZ SERIES Cliff Diver "Consistently exciting." ? Kirkus Reviews Hat Dance "Emilia . . . is a force to be reckoned with." ? MysterySequels.
Leggi di più Leggi di meno