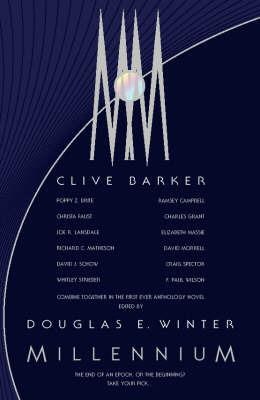 
A uniquely structured dark fantasy anthology/novel featuring inter-related stories from: Clive Barker, Poppy Z Brite, Ramsey Campbell, Charles Grant, Richard Christian Matheson, Whitley Streiber and Schow & Spector. Millennium. The end of an epoch. A unique book for a unique time: the end of the twentieth century, a century which has seen warfare escalate to the killing of millions by the dropping of a single device; organised genocide; the rise of the drug culture; organised crime; mass entertainment; and global culture. It has been an extraordinary century, a remarkable escalation of skills and knowledge to round off the second millennium. But has the human soul evolved? Surrounded by an encasing novella by the master metaphysician Clive Barker, Millennium explores the workings of the human heart in the ten decades that comprise the twentieth century: from the death of the American West, through the rise of the Third Reich, to the rock-and-roll years of the seventies and the mass culture of the nineties. Millennium is truly a work like no other book, a convergance of concept and talent and timeliness that is certain to achieve success.
Leggi di più Leggi di meno