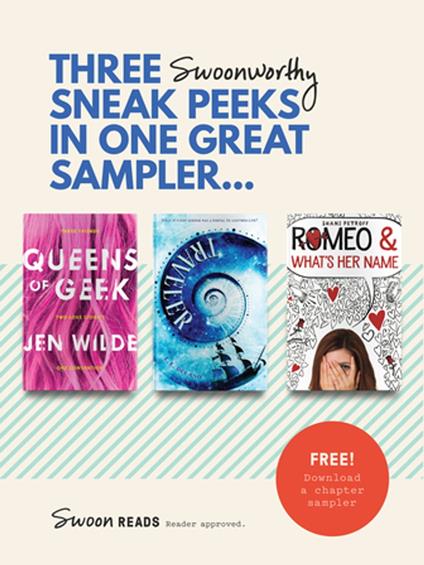 
Download a free sampler of three SWOONWORTHY reads. QUEENS OF GEEK: Charlie likes to stand out. She’s a vlogger and actress promoting her first movie at SupaCon, and this is her chance to show fans she’s over her public breakup with co-star Reese Ryan. When internet-famous cool-girl actress Alyssa Huntington arrives as a surprise guest, it seems Charlie’s long-time crush on her isn’t as one-sided as she thought. Taylor likes to blend in. Her brain is wired differently, making her fear change. And there’s one thing in her life she knows will never change: her friendship with her best guy friend Jamie—no matter how much she may secretly want it to. But when she hears about a fan contest for her favorite fandom, she starts to rethink her rules on playing it safe. TRAVELER: A teen writer discovers that every mirror is a portal into an alternate version of her life in this romantic YA fantasy by author L.E. DeLano. Jessa has spent her life dreaming of other worlds and writing down stories more interesting than her own, until the day her favorite character, Finn, suddenly shows up and invites her out for coffee. After the requisite nervous breakdown, Jessa learns that she and Finn are Travelers, born with the ability to slide through reflections and dreams into alternate realities. But it’s not all teacakes, pirates and fantasy lifestyles…Jessa is dying over and over again, in every reality, and Finn is determined that this time, he’s going to stop it… this Jessa is going to live. ROMEO & WHAT'S HER NAME: An unprepared understudy is forced to take the stage with her secret crush in this romantic YA comedy of errors from author Shani Petroff. Understudies Never Get to Perform ...which is why being Juliet's understudy in the schools yearly "Evening with Shakespeare" is the perfect role for Emily.
Leggi di più Leggi di meno